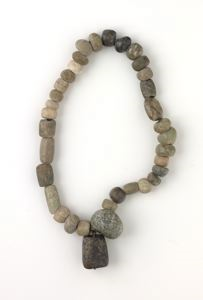 
Notes
The mixed shapes and colors of beads indicate a modern assemblage of ancient adornments of unknown provenance. The stonesâ characteristics suggest they came from West Mexico, although these kinds of beads are found throughout Central Mexico.

Modern restringing of ancient Mesoamerican beads and adornments is a common practice. Looters and dealers frequently pool these small finds until a wearable string can be produced and sold to a collector. In addition, it has been common in Mexico for ancient adornments to be repurposed into modern jewelry forms, a practice made famous by artist Frida Kahlo and silversmith William Spratling in the 1950s and 1960s; yet the practice can be traced to the 16th Century.