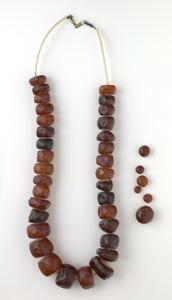 
Notes
Central Highlands Mexico
String of rounded beads carved from amber. Some have smoothed surfaces whereas others are faceted. It is likely that the faceted beads date to Colonial or modern times whereas the smoothed ones may be ancient.
Modern restringing of beads likely dating from both Pre-Columbian and modern times. Amber was used for adornments and some ritual objects among many peoples of ancient Mexico, especially during the Post-Classic period. Its use for adornments and medicinal purposes (a common practice in Europe for hundreds of years) continued throughout the Colonial period. Amber remains important today as both a medium for jewelry and other items (e.g. pipe stems) as well as in folk healing practices.