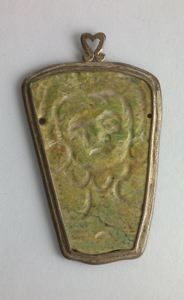 
Notes
Offerings at the Zapotec site of Monte AlbÃ¡n (Valley of Oaxaca) frequently include small, flat carvings similar to this example. They usually represent frontal depictions of standing or seated male figures, whereas smaller examples depict only a frontal face. All types usually have suspension holes drilled at the sides, as seen here, or through the rear lateral edges. These holes allowed for suspension as body adornment. For excavated examples, see Handbook of Middle American Indians, vol. 3, part 2:909-911.
This style of figural stone carvings as offerings continued into the Post-Classic period (900-1521 CE) in Oaxaca among both the Zapotecs and Mixtecs of Central Mexico, although differences in artistic style distinguish the later versions. Many were found in the rich cache in Mound B at Monte AlbÃ¡n (Monte AlbÃ¡n IV phase, 900-1300 CE). Examples also have been found in ritual caches in the Templo Mayor, the Aztec capital in TenochtitlÃ¡n (Mexico City).