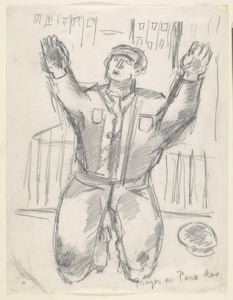 
Notes
In November 1942, while still in Maine, Hartley wrote to his friend, Carl Sprinchorn, "I finished a 'Prayer on Park Avenue' picture yesterday. . . . what a subject â absolutely original." He did two preparatory drawings (this one and another in the Museum of Modern Art, New York) and two finished oil paintings of this subject. The drawings must have been done the previous winter or spring when he was in New York and worked on at least one of the paintings after returning to Corea, Maine that summer or fall. The Prayer on Park Avenue works fit into the religious themes that dominated the last three years of Hartley's life, most of which cast common people, like this poor man and Nova Scotia or Down East fishermen, into scenes of typical Christian iconography: the pietÃ , crucifixion, Last Supperâor, as here, kneeling in prayer, with head and eyes lifted beseechingly. Hartley, who was not known for social realism, here poignantly comments on the man's plight by situating him on the avenue that epitomizes New York's wealthâboth commercial and residential. The rough, sketchy style coincides with the subject. Jagged, dark lines, made with a sharp pencil pressed hard outline the man's torso and legs, shoulders and neck. Diagonal strokes with a softer lead provide modeling, while other areas of clothing and background are shaded by rubbing.

Your current search criteria is: Exhibitions is "Figure Drawings from the Marsden Hartley Memorial Collection".