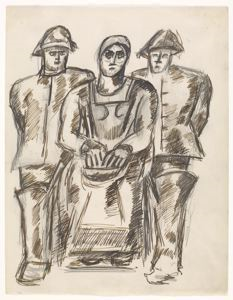 
Notes
In this ink drawing Hartley may at first have sketched the figures with graphite pencil and then applied bold dark outlines in black and finally diagonal and crosshatched strokes for modeling the figures. On the other hand, the pencil is not simply an under-drawing; rather, the graphite markings are emphatically repeated or rubbed to hold their own and add tonality. The composition is close to the final painting, The Lost Felice, ca. 1939-40 (Los Angeles County Museum of Art), with the sister, Felice seated at center, her in a bowl on her lap and her brothers flanking her, slightly behindâa composition of such tightness that we cannot help but feel the familial bond among them. In the drawing, the two boys are more distinctly developed. They wear fisherman's coats, hats and waders; their hands are behind their backs. In the final painting, however, the boys, ghostly with grim facial features and hollow eyes, recede into the depths of the background space. Their hats remain but no other garb. Their outside arms have come forward and hanging from their thick hands are strings of fish. The grouping is even more compressed than in the drawing, and the figuration more symbolically presentedâall to emphasize that, like Hartley's earlier German Officer, paintings, this is a memory portrait of lost loves.

Your current search criteria is: Exhibitions is "Figure Drawings from the Marsden Hartley Memorial Collection".