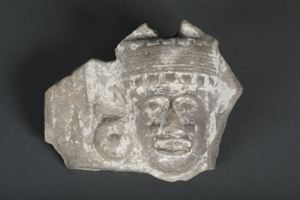 
Notes
See 1951.1.111a for a similar figurine. A stylistically similar figurine was found at Jonuta, Tabasco near the Usumacinta River (Ãlvarez, Carlos, and L. Casasola, 1985, Las Figurillas de Jonuta, Tabasco, Editorial Libros de MÃ©xico, MÃ©xico, D.F., lÃ¡mina 29b). The site is located on a major trade route from Pre-Classic through Post-Classic times, and ceramics imported from both Central Mexico and the Gulf Coast region are found at the site. However, given that Hartley lived and traveled in Central Mexico, it is likely the piece was found/acquired in this region.

Keywords Click a term to view the records with the same keyword
This object has the following keywords:
Ceramic, Clay, Figurative, Figure, People, Pottery
Exhibition List
This object was included in the following exhibitions:
Portfolio List Click a portfolio name to view all the objects in that portfolio
This object is a member of the following portfolios:

Your current search criteria is: Keyword is "BW" and [Objects]Country is "Mexico".