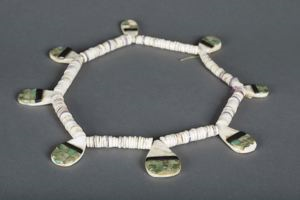 
Notes
The thin disk-shaped beads are likely of ancient origin whereas the tear-dropped shaped beads are of uncertain date. The inlays, also, could be ancient or modern. An analysis of the glue might provide data to ascertain whether they are of modern or ancient origin.
Notes: Thin, disk-shaped and teardrop-shaped shell beads are commonly found in ancient burials throughout West Mexico, and multiple strands of presumed white shell disk beads are depicted on ceramic figural sculptures from West Mexico, in particular those from Jalisco (e.g. see Townsend, Richard (ed), 1998, Ancient Art of West Mexico: Art and Archaeology of the Unknown Past, The Art Institute of Chicago, pp. 62, 125, 127; also see Pickering, R. and C. Smallwood-Roberts, 2014, The Visual Guide to West Mexico Shaft Tomb Ceramic Figures, Thomas Gilcrease Institute of American History and Art, Tulsa, pp. 107-115). It is unknown if the teardrop-shaped pendants are of ancient origin because the inlay style reflects both ancient Mexican and modern Western aesthetics.
Modern restringing of ancient Mesoamerican beads and adornments is a common practice. Looters and dealers frequently pool these small finds until a wearable string can be produced and sold to a collector. In addition, it has been common in Mexico for ancient adornments to be repurposed into modern jewelry forms (see 1951.2.22), a practice made famous by artist Frida Kahlo and silversmith William Spratling in the 1950s and 1960s, yet the practice can be traced to the 16th Century.

Your current search criteria is: Portfolio is "Hartley Entire Collection" and [Objects]Artist is "Unknown Artist (Mesoamerican)".