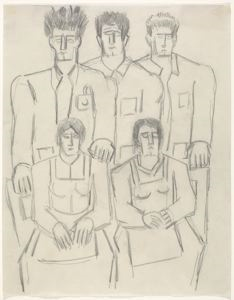 Even before the drownings Hartley had begun to write about his experience living with the Masons in Nova Scotia and descriptions of each family member to whom he assigned fictitious French Canadian names: Cleophas for Francis Mason; Marie Ste. Esprit, for Martha Mason, the mother; Adelard for Alty Mason; Etienne, his younger brother; and Felice, the only daughter. This original a manuscript, titled "Cleophas and His Own: A North Atlantic Episode" (YCAL, site full cat. number) evolved after the drowning into an account of the tragedy, complete with poems lamenting the loss and the sea's cruelty. Eventually, as Hartley acquired its broader significance, Hartley changed the subtitle to "A North Atlantic Tragedy," and a copy of that typescript is among the writings by Hartley that became part of the MHMC.