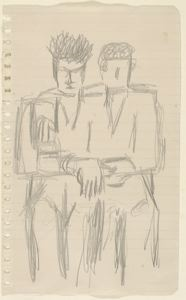 
Notes
This drawing and four others (MHMC 1955.1.95 and 96, plus 1955.1.44, and ink sketch) are preliminary studies for Fisherman's Family (Crocker Museum, Sacramento CA), an oil painting done during the last year of his life but refers back to 1935 and 1936 when he lived with the Francis Mason family at their island home on Eastern Point, Nova Scotia, near the tiny fishing community of Blue Rocks. Specifically, these drawings and especially the painting are elegiac commemorations of the drowning deaths of Alty and Donny Mason in September 1936. It was not until 1938 and 1939 that Hartley, who greatly mourned these young men (he had fallen in love, it would seem, with Alty Mason).

Even before the drownings Hartley had begun to write about his experience living with the Masons in Nova Scotia and descriptions of each family member to whom he assigned fictitious French Canadian names: Cleophas for Francis Mason; Marie Ste. Esprit, for Martha Mason, the mother; Adelard for Alty Mason; Etienne, his younger brother; and Felice, the only daughter. This original a manuscript, titled "Cleophas and His Own: A North Atlantic Episode" (YCAL) evolved after the drowning into an account of the tragedy, complete with poems lamenting the loss and the sea's cruelty. Eventually, as Hartley acquired its broader significance, Hartley changed the subtitle to "A North Atlantic Tragedy," and a copy of that typescript is among the writings by Hartley that became part of the MHMC.

Because this tiny, rough sketch was made on lined paper, torn out of a spiral notebook, ragged edge and all, it may actually (though we will never know for sure) have been executed in haste sometime shortly after the bodies of the drowned Alty Mason and his cousin Allen were found dashed against onshore rocks and clutched together. The body of Alty's brother, Donny was found days later. All three were ravaged by the stormy sea, fish and rocks. Whether done at the time or later, this sketch shows Allen with his arm over Alty's shoulder, hold hands together at center. Despite its loose, slightly scribbled execution, the tragedy and pathos of the occasion come though powerfully.