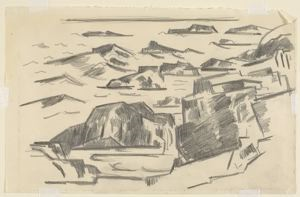 Th angle of the rock ledge at right in this drawing (MHMC 1955.1.91) has a disruptive, abstract perspective, creating an unbalanced, unsettling effect. Our focus is confined from bottom to top of the composition to water and rocks; there is no distance beyond the horizon line. The rocks are darker, more emphatic in their solidityâan effect possibly the result of the medium itself, since it is likely that here Hartley used lithographic crayon over graphite pencil marks. As in the previous sketch (MHMC 1955.1.90), the angled peaks of the waves and rock edges, especially as the scene recedes back, are almost indistinguishable.

Your current search criteria is: Objects is "[Maine Coast, Rocks and Sea]".