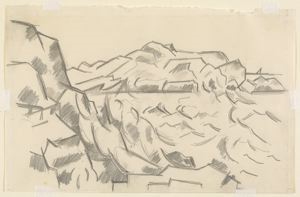 This drawing (MHMC 1955.1.90) depicts one of Hartley's favorite seascape compositional motifs: a ledge of granite boulders on the left (or, variously, in other versions, on the right) from top to bottom of the paper, against which rough waves crash. It could be a study for any number of finished oil paintings of storm waves, such as Rocky Coast, ca. 1937-38 [last known at Skinner Auction, 2003; will try to locate buyer/owner]. In contrast to the more placid seas of the previous two MHMC drawings, this is rough, storm driven water with the dramatic effect intensified by its crashing action against the wall of granite. In keeping with that drama, the draftmanship is bolder, darker, heavier. Curiously, however, the pile of rocks and the upward rushing water seem equally solid, equally fluid, as if their identity and interaction are indistinguishably linked both conceptually and physically.