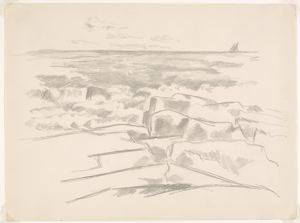 Many areas along the Maine coast contain broad expanses of blocky rock ledge. One of these, is Schoodic Point (now part of Acadia National Park)âone of Hartley's favorite places to watch and sketch the sea and possibly the site of this drawing (MHMC 1955.1.89). Its composition is divided in thirds. The foreground ledge of granite blocks with another off to the left partly submerged as the ocean churns over the hard surfaces and then extends left, becoming in frothy by means of short, curved strokes. In the middle ground, which is a wide expanse of sea, we sense wave motion via a combination of very fine, hard lines stroked diagonally at varying densities and quite soft shaded (or rubbed) areas that give dimension and volume to the open water. Finally, the flat horizon line, with a sailboat to define distance, separates the sea from the sky, its few clouds taking shape by broad, curvy marks from the pencil's edge.

Your current search criteria is: Objects is "[Maine Coast, Rocks, Sea, and Sailboat]".