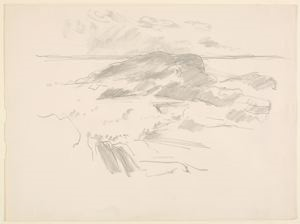 Also noteworthy is the fact that rocks and waves were of such importance to Hartley that he took many photographs of rock formations and rocks and waves on the coast of Maine, now in the Marsden Hartley Papers, Beinecke Rare Book and Manuscript Library, Yale University, such as

In MHMC 1955.1.88, using only a pencil (or pencils of varying thickness and hardness) and different angles or edges of the graphite point, he captures with expressive verve all aspects of the simple scene: sharp, fine contour lines to outline the main rock formation, made darker by pressure than the interior shading which is rendered by means of soft, diagonal strokes with the edge of the pencil; other staccato, sideways strokes to suggest movement of water between the rocks; and very soft, wide marks (and probably rubbing with thumb or finger) for sky and atmosphere. And always, of course, making judicious use of the white of the paper surface to delineate shape but also to provide the spatial expansion of this sea view.

Your current search criteria is: Objects is "[Maine Coast, Sea and Rocks]".