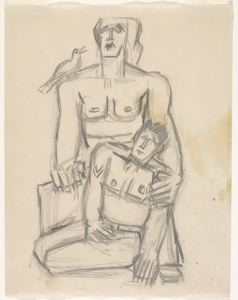 
Notes
This and the previous drawing (MHMC 1955.1.86) are two studies in the MHMC that relate to Hartley's finished painting, O Bitter Madrigal, 1942-43 (Private Collection)âbasically Hartley's interpretation of the PietÃ , part of the late figure works on religious themes. In this version, the composition now closer to that in the final painting. Hartley's use of the graphite pencil medium is different in this version too. Whereas in MHMC 1955.1.86 is basically a contour drawing, in this one, strokes are thick and sketcher, with much emphatic repetition of lines to define certain areas of the anatomyâjaws, collar bones, armpits, outer edges of arms and legs.

Hartley wrote a poem of the same title in which the speaker grieves with utter lamentation for "My son! My son!" and pleads "cease pouring into my ears, bird on my shoulder, / this anguish, this blood-strewn agony." In this version of the sketch, Hartley has eliminated the donkey and standing man of the other MHMC drawing.

In both preliminary sketches, Hartley is reflecting on the sacrifices being made by young men in the war then raging in Europe. Speaking in general of the crucifixion works, Hartley wrote in a letter that summer (1942), "They have a slightly ironic sense because I think of little else than the crucifixion of brave and helpless youth. . . . They are not in the slightest sense propaganda, but are strictly poetical. There was a crucifixion took place a few months ago â 6 miles from here â a young and very talented soldier," a talented musician who had graduated from Bowdoin College, was "sent home â dead â overworked by military rigoursââa comment confirmed in this version by the chevrons (stripes of an army corporal) clearly visible on the right arm of the Christ figure.

Your current search criteria is: Objects is "[Preliminary drawing for O Bitter Madrigal]".