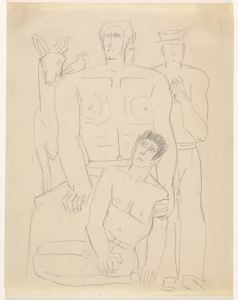 
Notes
This and the next drawing (MHMC 1955.1.87) are two studies in the MHMC that relate to Hartley's finished painting, O Bitter Madrigal, 1942-43 (Private Collection)âbasically Hartley's interpretation of the PietÃ , part of the late figure works on religious themes. Hartley wrote a poem of the same title in which the speaker grieves with utter lamentation for "My son! My son!" and pleads "cease pouring into my ears, bird on my shoulder, / this anguish, this blood-strewn agony."

Though raised in the Episcopal Church, Hartley was never an adherent of any organized religion. Nevertheless, he had a lifelong, idiosyncratic involvement with a variety of spiritual traditions, especially Christian mysticism. He read widely among the medieval mystics and lives of the saints, wrote essays and poems on spiritual and religious themes, and incorporated imagery, iconography, and implicit and explicit Christian subjects into his art. In the last three years of his life, perhaps sensing his own mortality, Hartley became absorbed in depicting the pathos and suffering of Jesusâs crucifixion in eight major paintings and many drawings, all powerfully emotive. Critics have noted that some of these depictions appear to be self-referential, Hartley reflecting, perhaps on his own artistic experience, his own martyrdom, of a sort, to a life of neglect and povertyâas well as the sacrifices being made by young men in the war then raging in Europe. Speaking of the crucifixion works, Hartley wrote in a letter that summer (1942), "They have a slightly ironic sense because I think of little else than the crucifixion of brave and helpless youth. . . . They are not in the slightest sense propaganda, but are strictly poetical. There was a crucifixion took place a few months ago â 6 miles from here â a young and very talented soldier," a talented musician who had graduated from Bowdoin College, was "sent home â dead â overworked by military rigours.â With expressionist mastery Hartley conveys the mystery and agony of the cross as no other American modernist dared to do.

Your current search criteria is: Objects is "[Study for O Bitter Madrigal]".