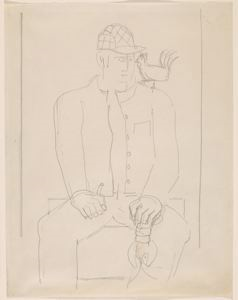 
Notes
This sketch is a preliminary drawing for the painting Young Sea Dog with Friend Billy, 1942 (Private Collection) and differs from it only in minor details. In 1942, Hartley arrived in Corea, Maine, where for the second year, he lived with the Young family, in mid-July and immediately set to work on six large paintings (40 x 30 in.), and by the end of the season in October had finished nine more. This preliminary drawing and the oil, Young Sea Dog and Friend Billy, were likely among these new works. This was one of those moments in the artist's career when he felt confident in his subject (and could afford to buy the larger format supports, either canvas or Masonite)âa situation in which he eagerly took on the large scale works, which, he knew would attract more attention in gallery exhibitions. The "Sea Dog" character, with his pet rooster, is no doubt one of the lobster fishermen Hartley encountered around the Corea wharf. Note how the artist placed thick lines (using the side of the pencil) left and right of the figure as a framing device.

Your current search criteria is: Objects is "[Preliminary drawing for Young Sea Dog with Friend Billy]".