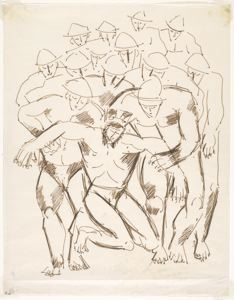 
Notes
This drawing is one of a series of ten works (seven drawings, three oil paintings) executed by Hartley around 1942 on the Christian theme of the Deposition from the Cross or the Pieta. The MHMC has three drawings (this one, 1955.1.80 and 1955.1.82)--all studies for Christ Held by Half-Naked Men, 1942 (Hirshhorn Museum and Sculpture Garden, Washington DC) in which Hartley references Jesus's disciples (mostly fishermen or common men) by depicting Maine fishermen tenderly lowering the body of the crucified Christ. This drawing and the next, titled Badly Bruised â Who Is He? (MHMC 1955.1.82) are both ink drawings and schematic in style, although this version uses shading in the four central figures to add volumetric weight to the large male bodies. With Badly Bruised, on the other hand, the artist used the barest of contour lines and dashes and dots to define the bodies. The pathos of the scene in both is reinforced by the closed or downcast eyes of all the figures.

Critics have noted that some of Hartley's depictions of the Christ depictions appear to be self-referential, Hartley reflecting, perhaps on his own artistic experience, his own martyrdom, of a sort, to a life of neglect and povertyâas well as the sacrifices being made by young men in the war then raging in Europe. Speaking of the crucifixion works, Hartley wrote in a letter that summer, "They have a slightly ironic sense because I think of little else than the crucifixion of brave and helpless youth. . . . They are not in the slightest sense propaganda, but are strictly poetical. There was a crucifixion took place a few months ago â 6 miles from here â a young and very talented soldier," a talented musician who had graduated from Bowdoin College, was "sent home â dead â overworked by military rigours.â

Your current search criteria is: Objects is "[Study for Christ Held by Half-Naked Men]".