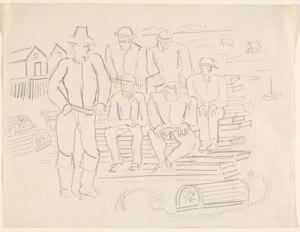 
Notes
This pencil sketch is a preliminary drawing for the pastel and the oil painting of the same title [illustrate or link to], both in the collection of the Metropolitan Museum of Art, New York. The MHMC drawing and the pastel share the same composition, while in the finished painting, Hartley has placed the figures on a dock, rather than a sandy stretch of beach. In 1940, Hartley discovered the little fishing village of Corea, located along the Down East coast of Maine, which reminded him of the Nova Scotia town of Blue Rocks where he lived for two seasons with the Mason Family, until the tragic drowning in 1936 of Alty and Donny Mason. In Corea, he similarly found a congenial family to live with, and from 1941 to his death there in September 1943, Hartley spent eight or nine months with the Young family. This scene of lobstermen is probably local Corea fishermen on the town dock. Considering the care taken with the evolution and execution of the drawing, pastel and oil, as well as Hartley's delight at living with these salt-of-the-earth lobstermen, it is evident how much the subject meant to him.

Your current search criteria is: Objects is "[Preliminary drawing for Lobster Fishermen]".