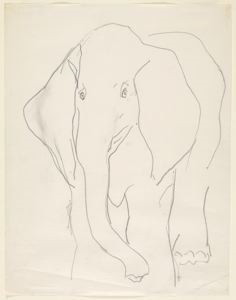 
Notes
From his boyhood Hartley loved the circus. He attended circuses throughout his career, in Paris, Berlin, New York, and Cleveland, where he went with his niece while on a visit to his family. He wrote many essays on different performers and circus arts, including equestriennes, acrobats, and high wire, trapeze acts. Two such essays were included in Adventures in the Arts: Informal Chapters on Painters Vaudeville and Poets (New York: Boni and Liveright, Inc., 1921). At the time of this drawing, in 1940 and 1941 he was finishing a book manuscript on the circus titled Elephants and Rhinestones, the cover of which would feature a string of elephants. Having met John Ringling at some point, he was to spend the winter in Sarasota, Florida, winter home of the Barnum and Bailey Circus. A typescript of Elephants and Rhinestones is one of the manuscripts Norma Berger donated as part of her gift to the MHMC.

Your current search criteria is: Objects is "[Elephant]".