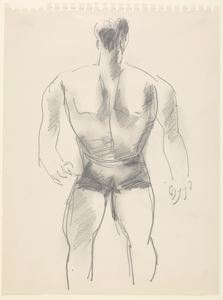 
Notes
This and the previous drawingâthe back view (1955.1.76) are rendered in the same manner, with more modeling and shading than the rest of the Old Orchard series. Using diagonal strokes and rubbing, Hartley's intent here seems to be a more developed graphic representation of the muscleman concept. As is so often the case with these figures, while the hands are big, the rendering of them is scantâsometimes merely elongated single lines and one arm is longer than the other.

Your current search criteria is: Objects is "[Standing Male Figure (back view)]".