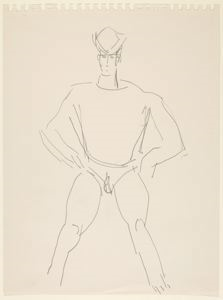 
Notes
In the direct, frontal stance of this figure and somewhat in the vein of Leonardo da Vinci's Vitruvian Man, Hartley celebrates the beauty, symmetry, and sensuousness of the human body. Unlike these classical renditions, however, Hartley's figure is not nude, though nearly so with tight briefs and graphic emphasis on the genitals beneath the scant cloth.