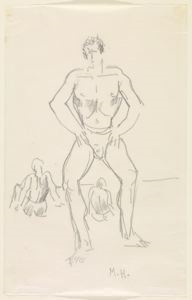 
Notes
Here Hartley's idea for the composition of The Lifeguard is taking shape, with the figure of the lifeguard, legs akimbo, slightly striding forward but dominating the space. A seated figure behind him is visible in the arch formed by the lifeguard's bent knees. As has been noted in the Hartley literature, Hartley is looking to CÃ©zanne's The Bather, 1885 (Museum of Modern Art for his inspirationâusing much the same pose: slightly striding step forward, hands on hips).

Even in the drawing, but more so in the final painting, Hartley seems to delight in distorting and abstracting space, distance, and relative size. The composition of the drawing contains the germ of the idea, but in the painting, design takes over. Sky, sand and figures are pressed towards the picture plane and space and figures are flattened. Compared to the drawing, the figure of the lifeguard totally fills the canvas vertically, becoming disproportionately large in relation to the three seated bathers. Hartley disrupts our learned assumptions of the diminution of size when seen at a distance. With the giantesque stature of the lifeguard and particularly the stance of the lifeguard, with hips wide open, frankly displaying beneath the tight swimsuit the contours of the genitals, Hartley is unabashed in alluding to a homoerotic subtext that pervades the Old Orchard Beach drawings and the paintings that evolved from them.

Your current search criteria is: Objects is "[Study for The Lifeguard]".