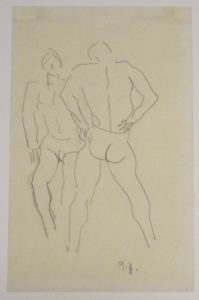 
Notes
Our focus is drawn first to the central, more fully articulated figure. The musculature of his torso is hinted at by areas of modelling at his lower back and neck. By contrast, the two men who face him are sketchily drawn; the pencil strokes that suggest arms and legs serve less to articulate a body than to create layers of abstraction that animate the grouping into the "quelque chose d'autre" that Hartley attributed to the work of geniuses like CÃ©zanne.