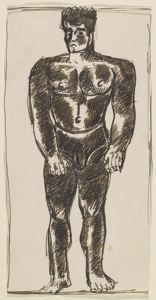 
Notes
This ink drawing, as well as the next two (1955.1.7 and 1955.1.8), depict square-shouldered muscle men, nude except for tight briefs and executed in the same heavily shaded manner. Inspiration for these drawings probably derives from the male figure in a photograph Hartley took of a shirtless man in long pants, in the same poseâshowing off his muscular arms held akimbo, hands on hips, and V-shaped torso.

Formerly thought to have been done in Berlin in the 1922-23 period, dating of them as been revised for several reasons. All but one of the figure drawings from 1922-23 are pastel or other chalks. Also, the angularity of head, jaw and nose, as well as the V-shape of the shoulders and arms with thick fingers, angled in on the thighs and the bushy, upstanding hair, more closely resembles Hartley's later wrestlers and lifeguards executed between 1939-41âthan the gymnasts or boxers done earlier in Berlin.

Your current search criteria is: Objects is "[Standing Male Figure, No. 1]".