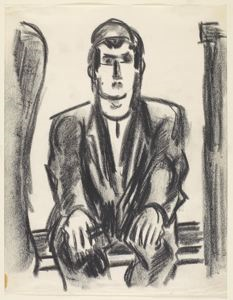 
Notes
This sketch and the next two (1955.1.46 and 1955.1.47) are done with black crayon, which Hartley increasingly favored for landscape and figure drawings during the last seven years of his life. While the typical artist's crayon of this type is a lithographic crayon that he used when making his two series of lithographs (1923 and 1933-34), he said in a 1937 letter that the he was doing "some wonderful drawings which are really paintings with the grease crayons one marks packages with." The three drawings in this series reveal why the crayon would appeal to him. It has the capability of boldly dark passages, such as in the lapels of the jacket, the hair framing the man's eyes, and the dark patch on his knee, while at the same time, lighter, grainier effects could be achieved by rubbin the side edge of the crayon as on the rounded stanchion on the left.

Your current search criteria is: Objects is "[Seated Man in Plain Jacket]".