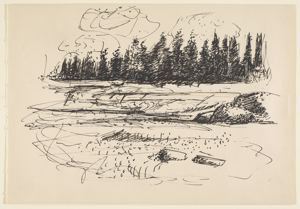 
Notes
Here Hartley captures a quintessential North Atlantic coastal scene: cove, beach, rocks, and coastline evergreens. Through his dexterity with the pen and ink medium, he gives us the basic elements: spare, thick gestural strokes and staccato dots and dashes in the foreground comprise the sand beach and crusted surface of the boulders at right, while the same type of strokes in the sky convey atmospheric effects of wispy clouds. Dense, vertical and hatched strokes of the trees form a dark backdrop for the scene.

Your current search criteria is: Objects is "[Forested Cove]".