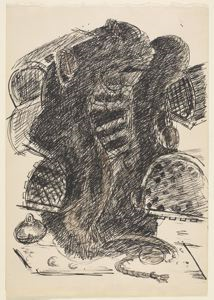 
Notes
Using the mundane tools of the lobster fisherman as a visual starting point, in much the same manner as the previous drawing, 1955.1.39), Hartley creates here something else. On either side of dense tangle of fishnets, four lobster traps cantilever at angles, seemingly suspended in midair. The nets and traps do not lie on the wooden dock but, rather, defying spatial logic, they twist and gyrate in a dramatically dance-like rhythm.

Your current search criteria is: Objects is "[Fish Nets and Lobster Traps]".