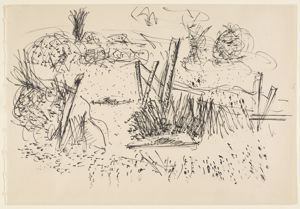 Your current search criteria is: Objects is "[Dogtown study: Wire fence and Bushes]".