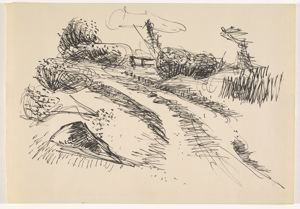 For Dogtown series (1955.1.32-1955.1.37): The terrain in Dogtown appealed to Hartley precisely because, as he described it, "A sense of eeriness pervades the place . . . the white shafts of these huge boulders . . . stand like sentinels, . . . otherwise the place is forsaken and majestically lovely as if nature had at last found one spot where she can live for herself alone. . . [It is] a cross between Easter Island and Stonehenge â essentially druidic in its appearance." The six Dogtown drawings in this series all feature the same landscape elements: granite boulders strewn helter-skelter by glacial movements when the ice receded. Then there are piles of large and small rocks, likely the remains of old stone walls or foundations of houses of bygone residents of the area. Sometimes these lie in strange circles (1955.1.35) as if dragged there by some ancient race of druidsâmade even more mysterious by remnants of old fences of leaning wooden posts and twisted and tangled barbed wire. Alongside the fence posts, juniper trees punctuate the vertical. The frenzied, gestural stroke of Hartley's fluid penâthe swirls, circular repeats, hatch marks, dashes and dotsâalso lend itself to the scrubby vegetation and wild blueberry bushes that pervade this untamed landscape.