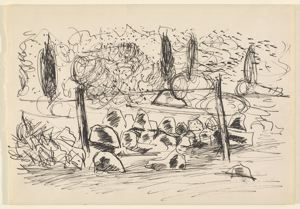 
Notes
For drawings (1955.1.32-1955.1.42): These pen and ink drawings were taken from the blue-covered Monogram sketchbook that was part of Norma Berger's original gift to Bates College in 1955. The first six represent landscape motifs in the Dogtown region, a glacial moraine on the outskirts of Gloucester on the Cape Ann Peninsula of Massachusetts Bay, where Hartley worked in 1931 and 1934. Following the Dogtown series in the same sketchbook are five drawings executed in the same medium and in a similarly expressive, fluid style, even frenzied style (1955.1.38-1955.1.42). With these five, there is a definite shift in subject matterâfrom boulder strewn terrain with juniper trees, blueberry bushes, fences, to harbor scenes, fishnets, and a forest glade. These are now thought to have been done in Blue Rocks, an offshore island in Nova Scotia where Hartley spent the summers of 1935 and 1936 with the Masons, a fishermen's family. A possible explanation is that the six Dogtown drawings, done either 1931 or 1934 were still in the Monogram sketchbook when he again took up the pen and ink medium in Nova Scotia. In fact, it has been established that Hartley did carry on with paintings of Dogtown from memory after he arrived in Nova Scotia, with a total of eleven canvases, the so-called "Green Landscapes," most of which feature the boulders and wire fence motif typical of the MHMC ink drawings. More precise dating is especially difficult, since the artist did not date any of the 34 known drawings of Dogtown, although a letter to his friend Adelaide Kuntz from 1931 mentions that he "is up in Dogtown every afternoon until the sun goes down" making drawings for paintings.

Commentary for Dogtown series (1955.1.32-1955.1.37): The terrain in Dogtown appealed to Hartley precisely because, as he described it, "A sense of eeriness pervades the place . . . the white shafts of these huge boulders . . . stand like sentinels, . . . otherwise the place is forsaken and majestically lovely as if nature had at last found one spot where she can live for herself alone. . . [It is] a cross between Easter Island and Stonehenge â essentially druidic in its appearance." The six Dogtown drawings in this series all feature the same landscape elements: granite boulders strewn helter-skelter by glacial movements when the ice receded. Then there are piles of large and small rocks, likely the remains of old stone walls or foundations of houses of bygone residents of the area. Sometimes these lie in strange circles (1955.1.35) as if dragged there by some ancient race of druidsâmade even more mysterious by remnants of old fences of leaning wooden posts and twisted and tangled barbed wire. Alongside the fence posts, juniper trees punctuate the vertical. The frenzied, gestural stroke of Hartley's fluid penâthe swirls, circular repeats, hatch marks, dashes and dotsâalso lend itself to the scrubby vegetation and wild blueberry bushes that pervade this untamed landscape.

Your current search criteria is: Objects is "[Dogtown Study: Junipers, Rocks and Fence]".