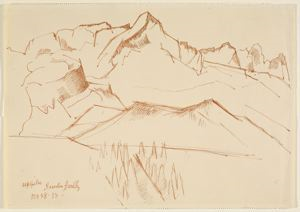 
Notes
The four drawings of the Bavarian alps in the MHMC belong to a much larger series, numbering around 84, that Hartley executed during the eighteen months he was in this region. From an exhausting sojourn in Mexico during his Guggenheim Fellowship (1932-33), Hartley sought escape to the cool North, Mexico being, as he wrote, "a country where you feel that at any moment the earth itself might be swallowed up in its own terrifying heat." So, from Vera Cruz, he shipped out to Hamburg in May 1933, where he stayed until the fall. Using leads from friends, he moved to Garmisch-Partenkirchen, a community in southern Bavaria along the Austrian border. Mountains became his obsession. He sketched and drew their contours over and over again, thrilled to be working again on the mountain theme. Oil paintings and a large series of silverpoint drawings round out this productive period. He immersed himself in the subject, using the different graphic media of graphite pencil, sepia and black ink, and pastel. Taken together these works on paper of alpine studies comprise a varied and masterful sequence of works, and the importance of these works to the artist is evident in the fact that many are titled, dated, and signed. The series also shows a wide array of graphic technique. In this drawing, an economical use of diagonal hatch-marks provides volume and definition to the various mountain formations.

Your current search criteria is: Objects is "Alpspitze".