[Seacoast with Trees, Rocks, and Driftwood] 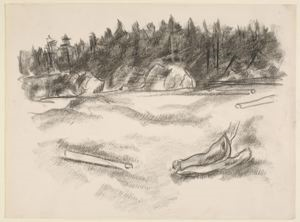 [Seacoast with Trees, Rocks, and Driftwood]


Notes
Hartley uses the side of the pencil and soft strokes for the selvage of water and sand, articulated more firmly with sketchy outline strokes. Rendering of the rocks and trees on the far side of the cove similarly combines sharp contour and soft side-of-pencil strokes, with the addition of diagonal hatch strokes for the deeper tonality of the forest.

This drawing is one of four in a series (1955.1.24, 25, 27) that were originally thought to have been coastal New Hampshire scenes from 1930, but that summer and fall Hartley was inland, painting mountains and river subjects around Franconia, Lost Beaver Lake and Little River regions, and there is no evidence that Hartley he time on the coast. Rather, the locales and style of these drawings resemble the North Atlantic coastal scenes he drew and painted later in Nova Scotia and Maine between 1936-43. These four are now grouped with others in the MHMC from those years (1955.1.88, 89, 90, 91).

Your current search criteria is: Objects is "[Seacoast with Trees, Rocks, and Driftwood]".