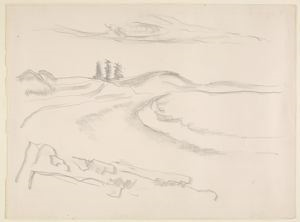 
Notes
Note different edges and pencil stroke techniques used by the artist, as for example, in the three trees in the background: a soft, broadside tapered mark for each tree, on top of which, fine lines executed with a hard, sharp pencil to add articulation of the forms. The same is true for rocks in the foreground. The dunes at right are modulated by diagonal hatch marks and shading, while in the sky, soft, broad marks, accented by sharp lines define cloud forms and two birds.

Your current search criteria is: Objects is "[Seacoast with Sand Beach, Rocks, Trees, and Clouds]".