[Landscape with Pine Tree and Forest] 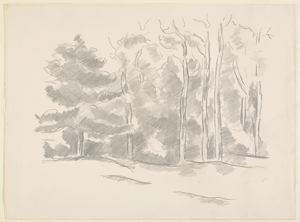 [Landscape with Pine Tree and Forest]


Notes
[for a group of six 1927 CÃ©zannesque drawings]: This work is part of a large series of about forty drawings, including a total of eight in the Hartley Memorial Collection (1955.1.16 to 1955.1.23), that Hartley executed in 1927 in the forest of the estate surrounding the Chateau Noir near Aix-en-Provence. For a period of many months when he devoted himself to drawing from nature, taking inspiration from the example of CÃ©zanne, who had moved to the vicinity around 1900 and spent the next few years roaming these same woods and abandoned quarries and producing exquisite watercolors of the trees, boulders, and walls around the estate. Placing himself under discipleship to the master from Aix, Hartley considered these drawings not mere sketches but finished work, the result of profound research into the realities of nature. Returning to the United States in 1928, he brought with him twenty-five of these drawings, which were exhibited at the Denver Museum of Art where he also gave a lecture titled "The Original Research of CÃ©zanne." Explaining them as an entirely new point of departureâa return to nature after his more abstract work of earlier years, he characterized the drawings as intimate studies of the relationship of volume and movement. Through the elimination of detail and distillation of form, his aim, he claimed, was a simultaneous blending of simplicity and profundity. [see Arnold RÃ¶nnebeck, " Hartley on CÃ©zanne," El Palacio, 24 (March 31-April 17, 1928):257-263.]

Your current search criteria is: Objects is "[Landscape with Pine Tree and Forest]".